For news, updates and alerts, go to the coronavirus (COVID-19) website.

An original member and founder of Australia’s most iconic Indigenous band Yothu Yindi is among those to have been allocated housing in Yirrkala last month.

Witiyana Marika has moved into a three bedroom property, with his family.

It is one of 22 properties to be allocated in the Arnhem region in March, including Witiyana’s mother Eunice who moved in next door.

A senior elder in the community, Eunice was allocated the first Murray River North property in Yirrkala where she will reside with her granddaughter Lydia and her great grandchildren.

For both Eunice and Witiyana, these allocations are particularly special.

The burial site of Roy Marika is located along the boundary line of the lease to Witiyana’s housing lot, and next door to Eunice .

Roy Marika was one of the Traditional Owners leading the way for Arnhem Land’s Indigenous land rights – Eunice’s husband and Witiyana’s father.

Eunice asked tenancy officers to invite “everyone” including contractors and staff to her ‘open house’ on the day after she received her keys.

She has invited her church family to say a prayer before her open house, because it was a special place and very significant that she could be close to the graves. 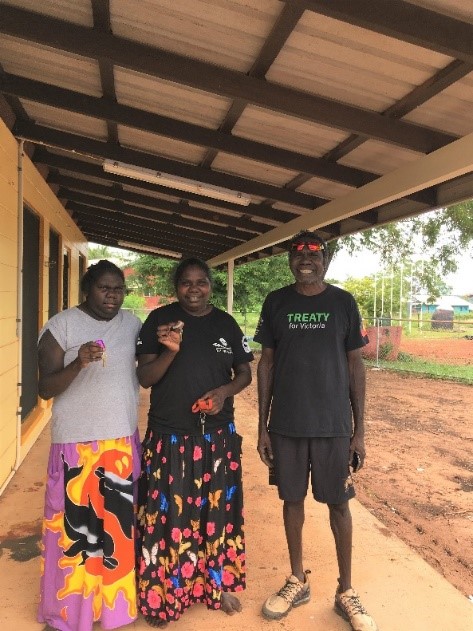 Jazlyn, Warrarii, and Witiyana Marika receive the keys to their home.
Back to news listing